India’s social divisions are one of the most extreme in the entire world, thus opening many opportunities for volunteer programs in India. From the party village and mansions of Hauz Khas in Delhi, to the infamous and incredible Bollywood culture in Mumbai, the rich in India live a life better than that to that in the western world. Meanwhile on the other hand, the poor in India live in one of the most squalid ad destitute conditions known to man, making the level of poverty in India the highest in the entire world. This is why volunteer programs in India are so special, fulfilling and rewarding. You can simply never stop giving.

This blog outlines the reasons to volunteer in India, and what your expected outcome from a volunteer program in India should be.

The Indian people will break a great many stereotypes. Well, that was definitely the case for me at least. For somebody like me who was born and raised in England, I held a great many stereotypes about India regarding crime, transportation and the civility of the Indian people. But to be honest, although poverty is rife here in India, crime is relatively rare if you are careful of your belongings. The metro here in Delhi is actually better than the underground and overground in London! With fully air-conditioned cars, smooth rides and very efficient service, I was quite surprised to say the least. Finally, the Indians are surprisingly civilised and try to give a good image of India to foreigners such as myself. For somebody who is British, the Indian’s are pretty incredible at queuing up and waiting in line!

India is simply incredible. I could go on and on about what there is to do here in India. But simply for the sake of keeping this article short and sweet, if you are an adventurer and a shopper you will have the time of your life here in India.

Whatever you study or work as, you will learn a great deal from a volunteer program in India.

Volunteering for a country with such rife poverty will truly test your will. You must be open minded and ready to adapt and learn the language. You will carry out many activities to aid your cause, but you will definitely do one of the following if you do a volunteer program in India, and that is either teach or fundraise. From these you will learn how to design and market your own ideas and your fundraising campaign, you will develop IT skills, logistics and communication skills. Teaching is a powerful tool to cement your own knowledge of a subject and is valued by employers as excellent self-development experience.

My own personal experience in a volunteer program in India has been great. Working with LAKSHYAM really made me utilize my innovative skills to help me become an active contributor towards improving the quality of life of the disadvantaged in India. 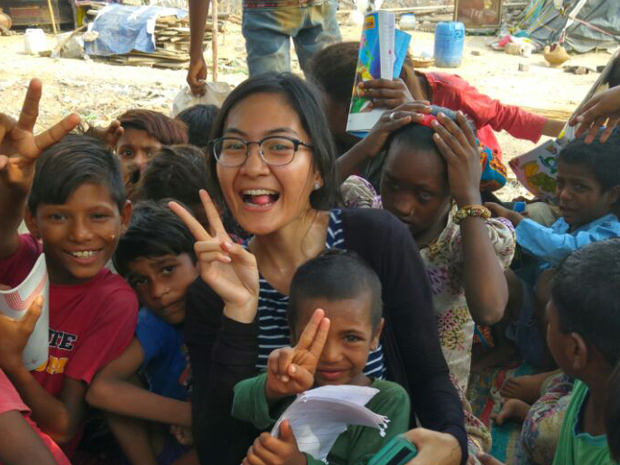 I had recently volunteered at a NGO, LAKSHYAM. Since its inception in 2004, LAKSHYAM has established itself for the welfare of the society, and mankind at large along with the best Volunteer Organization in India. Engaged in a number of social welfare activities like child welfare, health, education and women empowerment, Lakshyam has rigorously aimed at implementing effective and innovative solutions to improve quality of life of the not-so-privileged communities. Lakshyam’s ‘Butterfly Program’ provides Remedial Education Centers for students, in order to fill the gap in the government education system. Lakshyam ‘Toy Library’ aims at delivering toys and books from the privileged kids to the not-so-privileged ones. Till now, over 2,00,000 toys and books have been distributed across India. Lakshyam’s ‘Rooh Program’ tirelessly strives to educate the women of India and empower them with the confidence to lead a healthy lifestyle.

Following are the various objectives Lakshyam aims at:

I had volunteered at Lakshyam’s Ghaziabad centre. The centre has children with age group ranging from 4 to 12. All these children belong to not so financially developed families. Also these children lacked primary education. But here at Lakshyam, these children are provided with all the necessities comprising of lots of stationery, books, clothes and uniforms. I had an amazing experience spending time with students. Teaching them various subjects like English, Mathematics, Environmental Studies, Computers and Hindi was completely a unique experience for me. The children were very sweet and cooperative. And they had the zeal to learn new and interesting things. And I was amazed to see how some girls had remarkable dancing skills.

Overall I feel blessed to have worked with LAKSHYAM. It is always good to do something for the well being of our nation. I hope to stay in touch with this organization and do my bit whenever required.

As we know, India is a popular country well known for it’s culture, heritage, etiquettes, history, landmarks, traditions, religion and many more. But yes, it is also famous for one more thing i.e. male chauvinistic nation, where women are always considered inferior to men in various aspects of life. According to Jawaharlal Nehru, ‘the condition of a nation well is reflected by looking at the status of its women. The country, in which higher attention has been paid towards women and Child care, becomes more developed than others’.

India is a country where women have been worshipped as goddesses since ages. However, when it comes to giving them equal rights and freedom the same people neglect its importance and that’s because we live in a patriarchal society where people believe that the sole purpose of women is to take care of her Family and kids. One might think that such things only happen in villages where people are not educated enough to understand the concept of gender equality, but that’s not the case. Even in big metropolitan cities where people are educated enough to understand the difference between right and wrong, some people still have the belief that women are below men and deny to considered them equal.

One of the most famous saying by Pandit Jawaharlal Nehru, “To awaken the people, it is the women who must be awakened. Once she is on the move, the family moves, the village moves, the nation moves”. So, from the above statement it is quiet easy to understand that if the women of your nation is developed, then the development of your nation is a must. So to achieve this thing, we need to destroy the demons killing the rights of women and ethics and values from the society such as honour killing, illiteracy, dowry, rape, female infanticide, inequality, domestic violence, sexual harassment, illegal trafficking, prostitution and many other issues. Discrimination on the basis of gender is something which will bring cultural, social, economic and educational differences in the society, that will push back the growth of the nation.

Strategies and Initiatives by Government

In the past few years, the government has launched many schemes for women aimed at their upliftment. Here are some of them:

In conclusion, the modern woman of today has a lot of potentials. From managing the household to serving in the armed forces, or managing business, women are excelling in every field. Thus, the Government of India and various NGOs are creating various strategies and initiatives for women and child development.